Chemo, Hair, and a Weird-Ass Scare!

My first day of chemo:  January 8, 2018.  It was supposed to start a week before, but a snowstorm put an end to that!  So…I was a little scared about getting chemo, but not panicky or anything because I just resigned myself to getting this done with, killing the crap out of any stray cancer cells that could be there, and moving on.  Here I am at my first chemo appointment: 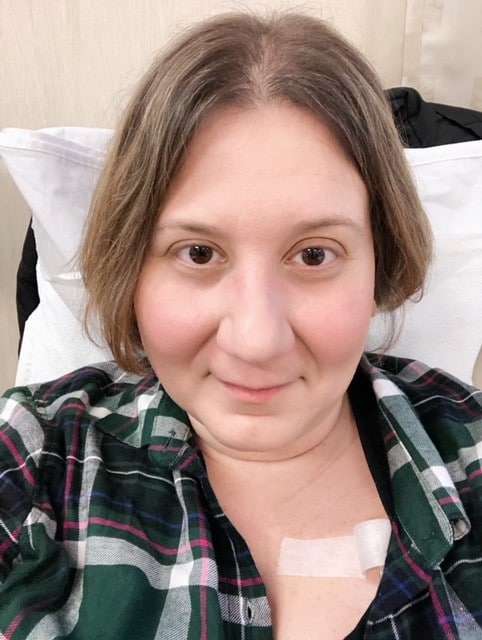 The first chemo went well, almost a little TOO well.  I was wiped out from the IV Benadryl, and anti-nausea meds, but I rebounded within days, and almost felt “normal”.  I went to a “Look Good, Feel Better” program, run by the American Cancer Society (www.cancer.org) the next week, and then went to the Soul Ryeders house in Rye, NY (www.souldryeders.org), to try on and pick a wig to wear when my hair fell out.  These organizations are GREAT, and you should check them both out, or let friends and family that may need them to check them out.  At the American Cancer Society’s program, there was only one other woman there, so we had a great session, which included a video, and a makeup application class, followed by a wig selection.  Even though I was trying on wigs with the Soul Ryeders, I still tried on at this session, because I had heard that women sometimes have more than one wig, because- hey, we sometimes can’t get it right the first time.  Here are my “Look Good, Feel Better” shots.  The blonde wig I call, “The Ada”, because that’s my mom’s name, and it looks similar to her hair!  The dark wig was just for fun- one of the instructors had me try it on! 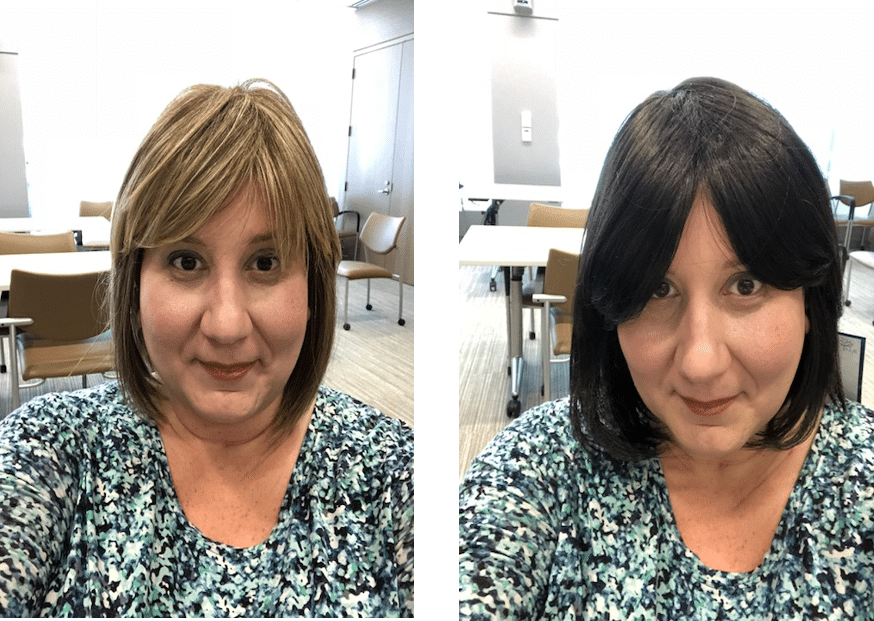 A few days later, I went and tried on wigs with the Soul Ryeders.  They are an organization based in Rye, NY, and they had a Wig Exchange Program- which is what I am participating in.  Women who had cancer and had gotten wigs, donate their wigs to the group when they are no longer in need of them.  Then, the wigs are professionally cleaned and photographed for the exchange’s website- where women who need wigs can browse, and choose up to eight wigs to try on.  When one is chosen, the woman pays a small rental fee, and gets to use the wig for as long as she needs/wants to, and then returns it for cleaning, and re-wearing by others.  It’s such a cool program!  I looked into buying wigs, but I fell in love with the way this program is run, so I decided to go with it.  A wonderful patient coordinator was assigned to me, and she guided me through the wig try-ons, etc.  This is a photo heavy post- because here are all of the wigs I tried on (Why should I be the only one who gets to see how fun this process was?!).

Can you guess which one I chose?  The second photo on the bottom row- that was the one (at that time- more on that in a future blog).  I was going for what looked like my own hair before any of this cancer BS happened- and that was the closest one.  It’s human hair (fancy!) and has a lace front, which means no obvious hairline, like some wigs have.  After I was done with all that, the patient coordinator made me an appointment at the salon that works with the Soul Ryeders- The Beauty Bar in Port Chester (GREAT ladies there!), to have the wig styled.

Jump to two days later, and I’m sitting in a salon chair at the Beauty Bar.  The stylist, Genith, says to me,”So you’re here to get your hair buzzed?”  HUH?!  BUZZED?!  I said, “No, just to have the wig styled…”  I was NOT ready to let go of the hair that I had ALREADY cut shorter!  But then Genith said, “Well, I can’t really style the wig properly if you still have your hair, because it will sit differently on your head with and without hair.”  Hmmmm…makes sense… Then she said, “It’s okay if you’re not ready yet- you can make another appointment.”  I sighed heavily, and with tears in my eyes, I said, “You know what- let’s just do it now.”- and that was THAT!  It was one of the many brave decisions I would have to make during this journey.  And- you guessed it- there’s photographic evidence!

SO- I left with a buzzed head and a styled wig- it was all good after it was all said and done.  I’ve worn wigs so many times in performances over the years, but when you’re wearing one in real life- it’s kinda weird.  It took some getting used to, and this is when I started experimenting with hats and beanies, too- because the wig thing is just not necessary all the time.

So- are you all warmed up now, and ready for the crazy stuff?!  Good, thought you were…

Chemo went relatively well.  The second chemo knocked me the hell out, and that’s when the nausea, pain, fatigue, and hair loss really kicked in.  But I still got through it, and by the second week in, I felt pretty good.  Each time I had chemo, I had to go the morning before for a routine blood test, to make sure that all the levels were good, and that my body was recovered enough for the next treatment.  Usually, everything checked out, and chemo proceeded.  I come to the fourth treatment- my last Adriamycin/ Cytoxin chemo, before moving on to the last four Taxol ones- and got the shock of my life.  My husband and I were sitting in the exam room, and the nurse took my vitals as usual, and then the oncologist walked in.  ”So, we can’t have your treatment today.”  (I’m thinking to myself- Why the F not?!) HUGE PAUSE.  “Your pregnancy test came back positive.”

My WHAT came back WHAT?!  Now, you have to have a little backstory here:  in 2007, I was pregnant with our son, when my water broke early, I was hospitalized for six weeks, finally having an emergency c-section at 29 weeks.  Our son was born with under-developed lungs and died six hours after birth.  Totally devastating.  But even more so was the fact that we were never able to conceive again after that- even with a few IUI sessions thrown in.  So now, in the middle of the second most shitty portion of my life, the doctor was telling me that my pregnancy test was positive.  I figured that this is TOTALLY a false positive, or that God was seriously messing with us! I chose to go with the former situation because I really had to believe that even God wouldn’t pull that crap right now.

The Oncologist, bless his soul, is the most overly cautious human I’ve ever met- with good reason, but to a fault.  He demanded that I see my OB/GYN immediately to make sure that this was a false positive.  Of course, I get the run around from the phone operators at my medical group.  “You have to wait seven weeks to confirm a pregnancy,” I’m told.  So I repeat over and over, “I’m in the middle of chemo- CANCER TREATMENT- and I have to see someone NOW.”  The operator says, “It’s standard protocol to wait seven weeks to confirm a pregnancy.”  So, losing it, I tell her, “You’re gonna have to break your friggin’ protocol for this because I’m telling you that I am in the middle of cancer treatment that can NOT proceed until I can confirm that I am NOT pregnant.  WHAT the F are you NOT getting at this point?!”  So, the operator patches me to my OB/GYN’s office, and the nurse there gives me the same story- seven weeks, blah, blah, blah.  I say, “You are all friggin’ idiots!”, hang up on her, and go hysterically crying back to the oncologist’s office.  God Bless the oncologist nurses- they are angels in disguise.  They are on all the phones trying to get me an appointment with one of the OB/GYNs in the practice, and finally, the doctor gets one of the nurse practitioners to come up from the OB/GYN department.  She takes one look at the lab results and says calmly, “Either this is a false positive or a chemical pregnancy because the level is not high enough to support anything else. Honestly, I wouldn’t worry about it.”  Okay- but NOT okay, because Dr. Overly Cautious still will not proceed until he gets an okay from my own OB/GYN.  My fourth chemo treatment would have to wait- and I hated it because I just wanted to get all of this the heck over with.  This was on a Thursday, and I had to wait until Monday to see the OB/GYN- and she said that this was surely just a false-positive, and she was 100% okay with me resuming chemo.  So, Thursday come along again, and we’re in the exam room at the oncologist’s office waiting to review the labs before finally getting back to the chemo- when he says that the pregnancy hormone level came back slightly higher, and he wouldn’t give me the chemo unless I had an ultrasound to 100% confirm that there was nothing there.  O.M.G.  I said, “ I am NOT leaving here again without having chemo, so let’s get this done right now!”  So, down I went to the radiology department to have the ultrasound.  I am pleased to say that there was nothing present to indicate a pregnancy!  I go back upstairs to get the chemo, and the oncologist says, “Can you just go do a urine pregnancy test to make sure?”  “NO.  I WILL NOT GO DO A URINE PREGNANCY TEST!  I was just probed internally to prove that NOTHING is there, and I absolutely REFUSE.  WHEN do you decide that enough is ENOUGH?!”    He sheepishly says, “Okay, you don’t have to do the urine test.”

Here is one last photo to show you that I wore the appropriate tee shirt to that treatment: 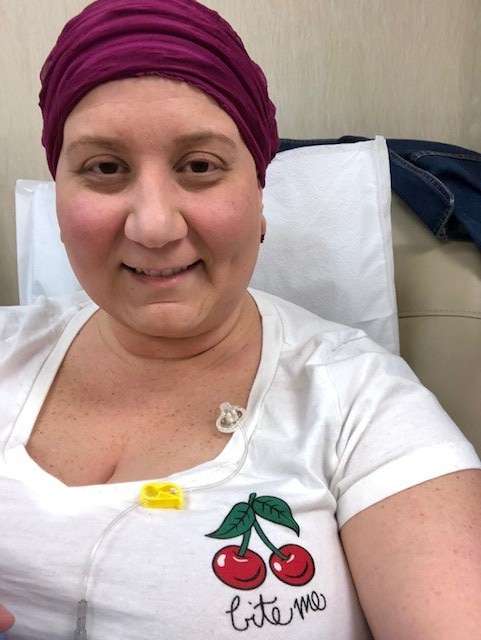 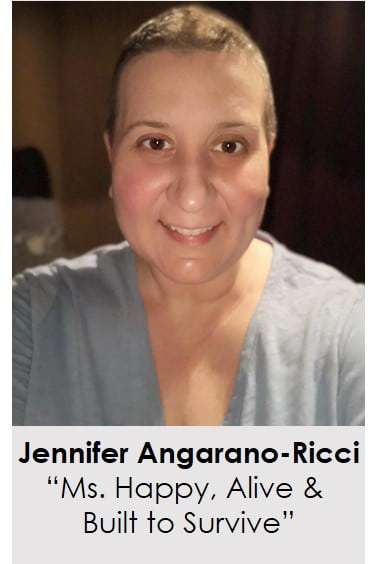 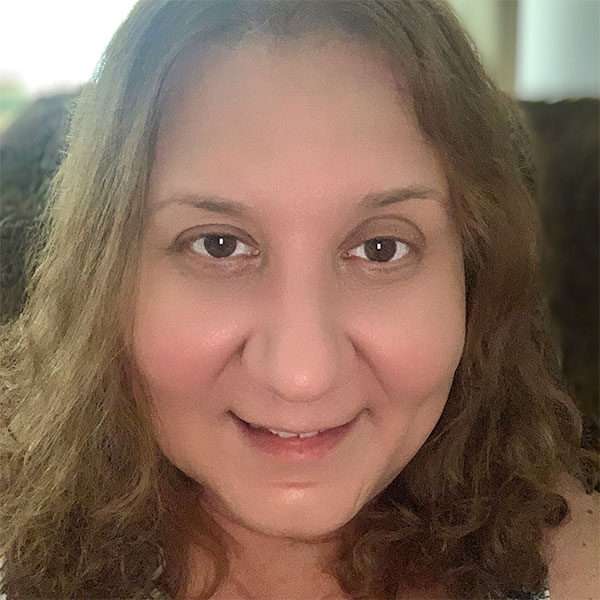