The Day I Met The Love of My Life

I can remember it like it was yesterday. I had just turned 21. My car was filled with everything I owned – an old box of vinyl, all the clothes I could squeeze in, and a blow dryer I “stole” from my parents. I had 350 bucks on me. I pulled up to my friend Tina’s apartment after driving from Florida via a month break visiting my family in Detroit. I can vividly remember going into her living room, sitting down, and staring out the window – wondering – what the hell had I done? I was scared out of my mind. I would have paid someone to come get me. I was secretly screaming, deep inside, for ANYONE to get me out of this. Yet I said nothing.

Little did I know – the nervousness, the excitement, the sweaty palms – this was the exact moment I met the first love of my life: New York. Or New York City to be exact. My first stop may have been Long Island, but NYC was calling my name from the start in a very soothing, seductive voice from across the river: “Juulliiee.” 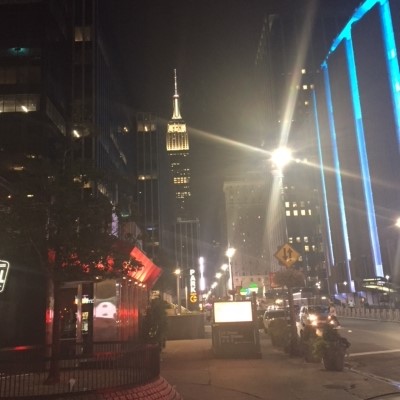 Weeks into it, I landed my first rock job DJing at WBAB on Long Island. Honestly, if I hadn’t gotten that gig (from sending out 10 cassette demos!), I’m sure I would have left, too. But things just seemed to work out for me there. I got the job, started dating someone, and through trial and error – found a cool place to live.

The funny part of this story is that Tina was the one who convinced me to move to New York. I had met her in Florida, where I was living with my parents. She moved to Long Island and we’d talk on the phone occasionally. She hyped up NY as the greatest place ever and offered me a place to crash while I got settled. But shortly after I got there, I found out she actually hated New York. So. She left. I stayed.

But I was restless living on Long Island. NYC kept whispering to me. Correction. The city was using more of a bull-horn at this point. “JUUUUUUUUUUUULLLLLLLLLLLLLIIIIIIIIIIIIIIIIIIIIEEEEEEEEEEEEEE!!!!!! COME ON, ALREADY!!” As soon as I could, I got my first apartment in Manhattan – on 82nd and Amsterdam in a gorgeous neighborhood on the Upper West Side. This is where I was schooled on the word “quaint.” If it’s in an apartment ad, it means SMALL. Very small. But I loved it just the same. My very own “quaint” studio apartment in a cute brownstone. I bought a loft bed and threw a couch underneath it. My windows faced a brick wall, so I didn’t exactly get a lot of light (sooo NYC). My kitchen was at most 4 square feet (I’m not kidding). And the elevator matched in size – fitting 2-3 people max.  But…I was living in NYC!!

My move to Manhattan came after landing a job DJing at a new rock station on 46th and 6th called Q-104.3. We played Alice in Chains and Tool. At the time, I thought the music was so heavy. Since we were owned by a small company, we were the underdogs in the business. But I have to say, it’s pretty fun being on a team of underdogs. We were fighting the good fight against corporate radio stations. This was definitely one of the most exciting times of my life. There’s nothing quite like the beginning of an amazing career in the Big Apple (please cue the movie: “Bright Lights, Big City”).

I swear it took me a year to get to know which direction I was going in once I got out of the subway. Sooo Midwest of me. I lived a block or so from Central Park. I sold my car. Started my first band. And I pretty much vowed to never live on Long Island again. I mean, when you to move to Manhattan, you become a bit of a brat. (You: “Ya think?”)

NYC has an energy you can’t quite get anywhere else. It makes you feel alive. The hustle and bustle. People literally walk down the street like they are late for something. 24/7. Yet there are times when you walk down a barren street late at night in the winter with snow covering the trees and it’s so quiet and peaceful.

You really do get a sense, as corny as it sounds, that if you can make it there, you can make it anywhere. I later moved into an apartment with a five-story walk-up and, let me tell you, surviving that is a feat in itself! And by the way, finding ANY apartment in Manhattan deserves a victory lap. Even apartment hunting is cut-throat in NYC.  But you adapt and get ‘er done.

There’s something so special about falling for a new city. It’s a first love. No one can take it away from you. It’s there forever. My circumstances changed, and I’ve since moved and started another adventure in Los Angeles. But, luckily, every single time I return to New York, I’m reminded of my love affair with it. Borough after borough. Brownstone after brownstone. Slice after slice. 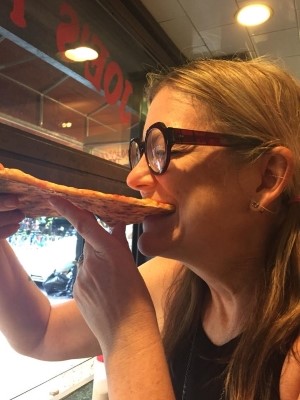 My advice to you – if you have the urge to start again – take the plunge. Move somewhere new. Just do it. (And yes, I’m even talking to my friend, Jaime, who is leaving me next week for Atlanta!) You can always go back “home.” Although, be warned – “home” will never be the same. New places change you. They make you face fears. Experience new ways of living. They even make you grateful for the old places, too (except for Florida… I’m never grateful for Florida 😊). 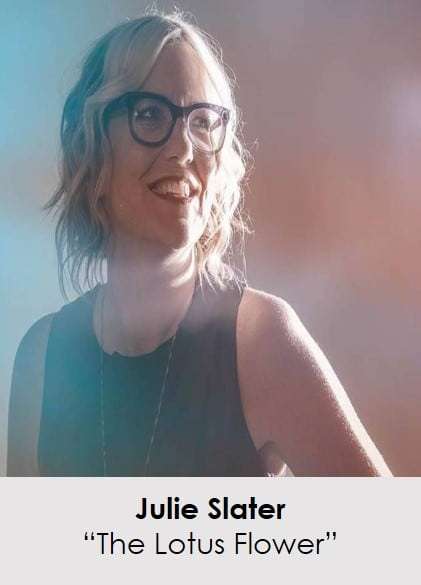