How he saved me…

BY: Jennifer Tonetti Spellman – “The Hustler”

A few weeks ago, I went to a healer. I had no idea these beautiful people even existed, but they do. For those like me who need a definition, here it is:

Definition of HEALER: A shaman is often referred to as a healer. They have the ability to “see” visions, travel between physical and spiritual realms, and transform energy. … In healing, people often refer to channeling “chi” or “universal energy” to help people clear energetic blocks.

I have always been one who is willing to ‘put in the work’ to get to the bottom of what doesn’t feel quite right. I know my faults, (I see you perfectionist/controller!) and I’m not complacent just saying ‘that’s just me.’ Not when some of my faults get in the way of living a life I want to live.  It’s then I work to change.

Speaking of changes, 2018 seems to be the year for them. Some very soul filling some soul-sucking. This past year saw some changes to my hustle, I bowed out of a business partnership, I am currently making the slow exit from in-home documentary photography to full on street work, and another entrepreneur-type adventure awaits me that will tap back into my sales skills and my love of homes. But more on that for another post. But one change was not good. Not good at all. It’s one I still cry about daily, since March 23rd.

Now bear with me on where this post is going, ok?

If you have never owned a pet, this may fall on deaf ears. But for pet owners who treat their pets like a human extension of their family? I think you may find this share be a comfort for when you have to say goodbye to your best friend.

Not many know (as I’m a firm believer in not setting my ‘world’ into panic mode unless there is something to panic about) but earlier this year I had a cancer scare.

On January 13th, Skippy, my dog, went in for an MRI to determine what the lump on his stomach was, and why he was bleeding from his privates. A week earlier, I had received news of a lump in a place that previously did not have one. I went in for a biopsy to determine if I, myself, had cancer. I, thankfully, was lucky. Skip, was given 3 months to live.

This could not be possible. Skip was my ROCK. He was my best friend for 13 years. I rescued him, but as they always say with rescue dogs, he really rescued me. He was there for every heartbreak, every joyful moment, the birth of my two kids and the constant house moves. He was the ONLY constant in my life, as far as I was concerned. If I was crying in the opposite end of the house, he’d find me. If I raised my voice a wee bit too loud, his head would pop up to see why I was upset. As an only child, I don’t have siblings- he was that, he was my best friend, he was my support, and he was my guy.  The only light in that dark March day, the day Skip had enough, was he was taken over the rainbow bridge by a caring vet in my own bed, listening to the soothing music of George Harrison. I kept my hands on his chest, so I physically could feel his last breath. He was there for me every step of the way. I didn’t want to shy away from him, as he took one last inhale.  When he did? I scream cried.  I never heard that sound come out of me. Ever. For anyone or anything. So, March was dark, very dark. 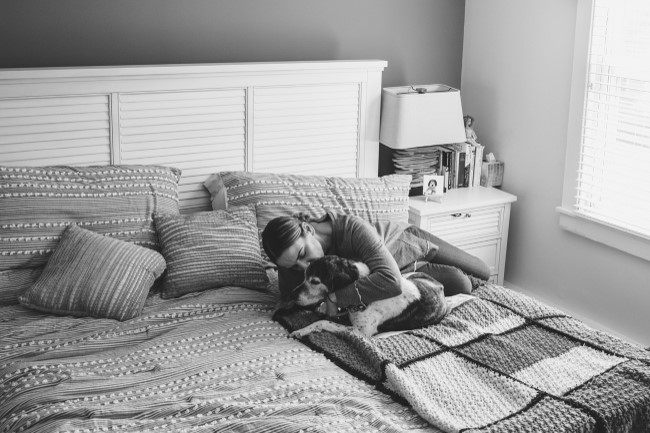 The last photo of Skip and me, that day, March 23rd.

Of course, when I met with the healer, I was going over the shit-tastic year 2018 has been thus far, and she said something that floored me. As I told her about my cancer scare and Skips’ cancer confirmation, she just shook her head slowly up and down and said, “of course he had cancer. Dogs ABSORB for us. They take on our sadness, our anger, our fear.  They truly are our protectors. So as you told me this story, I knew he had cancer.  That’s his job, to protect and just ‘be’ for his owner.” Holy shit. Now, you may not believe it, those words, but truer, more make sense words, I rarely hear. It made me think what a strong boy I had, who took one for the team, literally, until his last breath. 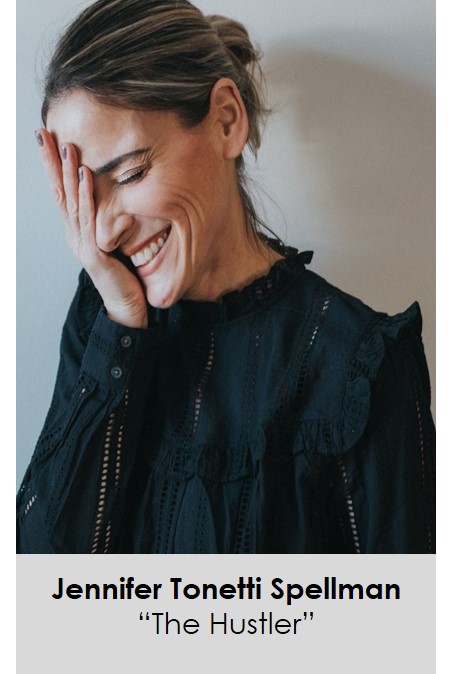 Jennifer Tonetti Spellman is a street and documentary photographer in NY where she resides with her husband and two girls. She is a contributor to the female street photography collective, Women in Street and co-founder and teacher at Illuminate Classes, an online photography school.  When not shooting random people on the street or teaching people how to shoot said random people on the street, she is practicing yoga or listening to the Foo Fighters or 1970’s rock while juggling all that comes with being an entrepreneur/mom/wife.