“Owls – Part 1: Old Friends and Signs From the Universe.”

Eleven years ago….. almost to the day, I stood at the back door of my tiny split-level home in New York listening to the sound of the traffic whizzing by. We lived in a house with a postage sized corner lot, situated directly next to a main road. If I stepped out onto my deck, I could have an entire conversation with my neighbor and clearly see any stains on her clothing because we were basically on top of their yard. I had a cup of coffee in hand and I was miserable and somewhat paralyzed with fear about my future. My husband and I were set to move with our 3-year-old daughter (for what was only supposed to be one year) to Sacramento, California. I had initially been excited about living in a brand new place,  after having only ever known life in New York but just prior to leaving we realized that we would most likely be unable to remain in New York if we wanted a better quality of life. We were two adults with advanced degrees who could barely afford the most modest of homes, even with friends renting a portion of that home and we also wanted more children. We were working so much that time together was scarce. When we did manage to enjoy a family outing, everything cost a small mortgage.  It soon became unavoidable that we needed a change of lifestyle for our child and any other possible tiny humans who might come along to join our family.  I had prepared to leave for one year. I had never expected that I would have to quickly say “goodbye,” to the security of what I had always known: a familiar neighborhood; our home; our families; a job that I loved; one of my best friends living downstairs from me; and regularly getting together with lifelong friends. Our kids were supposed to grow up together. Now what?

I had about one month to adjust to the fact that we were leaving………FOREVER. What was supposed to be a fun, short-term adventure was now becoming a permanent reality and I had no time to get acclimated to that fact. I needed more time.  I began to consider just staying in New York until my husband’s fellowship ended. I mean….we would be fine, right? People do things like this all the time….right? Desperate to find some solace and the strength to do something new and unknown, I found myself talking to my Grandfather who had passed away 15 years prior. Now…for the record, seeking any form of intervention, spiritual or otherwise was not a normal occurrence or me but I felt compelled to speak to my Grandpa. I stepped out onto my deck and sat down at the table with a wretched pit in my stomach; I felt nauseous. I put my head back, closed my eyes and yelled out loud “What should I do?” I heard a heavy fluttering above me which prompted me to open my eyes and lift my head up.  Five feet from where I sat and eye level to me, was an owl perched in the tree next to my deck. I finished my entire cup of coffee and sat there for about 30 minutes while this owl and I basically had a stare-down contest. 30 minutes. Up close. We just looked in each other’s eyes the entire time. It was surreal. The owl eventually left when my daughter woke from a nap in her usual screaming banshee fashion. Mister Owl was like “Nope. I am out of here. Quiet that creature down.” I felt peaceful and though it made zero rational sense why an encounter with an owl would give me the answers that I so desperately sought, I no longer doubted anything. I was going to California.

California was an amazing and freeing experience, but the details of that year do not really matter for the purposes of this story. My husband’s Fellowship year was coming to an end and we would need to once again begin searching for a new place to live. I had been having doubts again. Not really doubts. Crippling fear. Absolute and total crippling  fear. The fear would once again be dissolved with a possibly random occurrence that I saw as a “sign,” while I was visiting back in New York for a week and met up with an old friend who I had known since I was 14. On a funny side note, my Mother had not wanted her then 36-year-old daughter to take the train into Manhattan because she feared for my safety, but she relented when she knew that HE had promised to meet me and safely walk me back. “Oh…..well then if HE is meeting you. Well then, I guess it’s OK.” (Because little girls are fragile. Just kidding Mom. Sort of. But I do “get it” now that I am a Mom. It is tough to allow our girls safely and  competently into the world without instilling unnecessary fear into them.)

My friend and I met at Penn Station that night and set out to find a place to eat. Walking throughout Manhattan arm in arm, it felt like 10 years had never passed since the last time our old group had hung out, but we can’t keep looking back if we are meant to move forward. That night would be the last time we met up again. Over the years there would be occasional messages to update on special happenings: pregnancy; the birth of a child; a move; a job change; a chance meeting with a mutual friend; encouragement to ask that mutual friend on a date; a picture of the engagement ring; a wedding. Eventually……nothing. People are there for you when you need them though and often, these encounters happen with perfect timing.

Twenty plus years of friendship and I had never once known my buddy to be anything other than a genuinely kind, giant, teddy bear. At a svelte but muscular 6 foot plus, with a deep booming voice, his presence at first could seem intimidating but it was always belied by an infectious laugh and genuinely kind smile. His physical stature had initially scared the bejeezus out of me when he approached my locker decades ago looking for SOME GUY whose locker was next to mine. This giant shadow had loomed over me while I was crouched down retrieving some books from the bottom of the abyss that was my locker and his voice cut into my concentration, startling me. First impressions sometimes suck. His manner would eventually show itself to always be a dependable type of calm and Zen-like. He was like a protective big bother type and a genuinely caring friend. I was lucky to consider a few wonderful young men to be such devoted and respectful friends over the years. Young girls need that type of respect and reassurance that they are worthy as humans, especially as they grow into mature sexual beings. I am always thankful for those who didn’t attempt to take advantage of my trust and were true, legitimate friends. Hopefully, you know who you are.

We eventually found an outdoor café to catch up and discuss where life had taken us. I casually mentioned not loving how busy my husband’s work life was and how it was impacting  me negatively and he became angered. Not at me. Not even really angered. Frustrated. I had never seen him even remotely angry during our years of friendship unless it was for a very valid cause. It certainly caused me to pause. He said “When did you stop doing things for yourself? You always did your own thing. Why do women expect us to be their saviors? Why do you drop your independence once involved with us? Do you realize that your husband and most men are just working our hardest to be there for you and we also have a lot on our shoulders? Give us time and don’t expect us to be your everything. We will 100% be there for you. Don’t wait for us. Be you. Do….you.” The basic implication of his comments was that as a woman, I can be responsible for my own happiness, instead of putting that added burden onto my husband and then all else will fall into place. Now….this friend is not at all selfish. On the contrary, he is probably one of the most giving people and often it had been at a detriment to himself. His comments were not meant to imply that a partner doesn’t have a responsibility to  be supportive. He only meant that my self-worth and happiness could not thrive by being hinged ONLY to someone else’s presence, approval or involvement.

Since our daughter’s birth, I had honestly been just waiting around a lot while my husband was at work. I worked. I came home. I was a Mom. I cooked. I cleaned. I did the grocery shopping. My child never slept. My child constantly screamed. Repeat. I also battled post-partum depression. I did it mostly all alone. I was lucky to have the support of friends and family, but the stigma of depression is always present; you close off until you get through it, but you are never truly open about it. You feel ashamed. You feel especially ashamed after the birth of a child because everyone has told you how wonderful it will be. Then it doesn’t feel wonderful. So….in that sense, I was alone. I was tired. I was so tired that I had stopped doing anything that I enjoyed and had basically been putting everything on hold to survive. I did what HAD to  be done for others and that was being a working Mother, household engineer and Wife. I was waiting for my husband’s presence to give me purpose. I had lost Jenn. This night out with my friend would begin my transformation towards getting back to myself and my own pursuits. Everything else did just fall into place after that. I have never looked back.

We finished up our food and began the trek back towards Penn Station. On our walk back, we were mostly quiet, and I kept thinking about what he had said earlier.  I looked up and saw that a sign we were passing was engraved with a large owl. I laughed to myself and simply felt at peace with moving forward to a new phase of my life. I thought to myself… thank you, Grandpa Paul. I was no longer afraid to move to another city that was still unknown at this point. I was no longer afraid to just do things for myself again. Small, random occurrences can often be reassuring. We see them as “signs.” People often take only what they want to……or NEED to, from any given situation.

Maybe we see what we need to see.

*****The owls have continued to give me “signs” over the years. Stay tuned for Part II, next month!

Jenn Miele Leslie lives in Woodbridge, CT with her husband, three kids ages 7, 9 and 14 and a stubborn but cuddly bulldog who likes to fart and snore. Originally from Long Island, N.Y. (yes, that IS how you say it – if you’re from there you just understand) she misses being able to find a decent bagel or breakfast sandwich. Once an Art Therapist specializing in working with adults with various developmental disabilities, Jenn now spends her time shuttling her minions to: school; playdates; dance classes and competitions; occupational therapy; coding classes; and what feels like a million additional places, on a daily basis. In her occasional down time, Jenn enjoys photography, painting and an iTunes playlist that boasts way too many 90’s alternative songs. 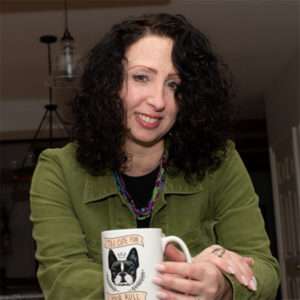