BLACK HISTORY IN THE MAKING

Being born and raised in a north Bronx suburb, a stone’s throw away from Harlem, as a young woman, my mom made sure that I was fully aware of #BlackExcellence before it was a thing.  The streets of New York City became the canvas upon which she weaved narratives. Whether it was stories from her youth in the east Bronx or her young adult life stompin’ at The Savoy, to us shopping at The Mart on 125th Street or sitting in front of the Audubon Ballroom talking about Malcom X, my formative years affirmed me.  It affirmed I also should be proud of our collective Black history.  Proud of the skin I am in, and excited for the world of possibilities that await me.

I come from greatness.  My parents instilled in me awareness around the richness of Black history in music and film, which surrounded our home.  If it wasn’t Daddy playing Charlie Parker or Miles Davis, as jazz was his main stay, it was Mommy jamming Phyllis Hyman or Stevie Wonder.   The R&B history around Motown alone was enough education for a young girl coming of age to the soundtrack of a solo debut from Michael Jackson living Off The Wall.  Gil Noble hosted Like It Is with discussions on current events, elevating political and cultural figures of the 20th Century from the African –American, African and Afro-Caribbean diaspora.   I was fourteen when Spike Lee debuted Do The Right Thing and barely seventeen when he released Malcolm X.  His cinematography transported me to a world where art imitated life and his fictional characters and non-fiction architects gave me continued awareness of my past and present.

My everyday heroes were my educators, who further extended my knowledge base. Mr. Jones gave me appreciation for Toni Morrison and Alvin Ailey.  Ms. Randolph provided the framework for my exploration of the Black Panther Party and the Student Nonviolent Coordinating Committee, the Black Power political organization and the principal channel of student commitment during the civil rights movement during the 1960s.

Because my exposure to the arts and entertainment started with my Mom & Dad taking me to the great bright way of Broadway – The Tap Dance Kid, Sophisticated Ladies, Dreamgirls, The Wiz, Jelly’s Last Jam, which starred Black actors and told life from our point of view, it also complimented what I was experiencing.  It would fuel my own interest in music (clarinet), dance (ballet, jazz and African) and theater (drama) which I would explore/pursue at the famed Harlem School of the Arts in my teen years.

Internships in the music business propelled me further into creative realms and ultimately the start of my career.  Working at A&M Records, Vibe Music Seminar, The Terrie Williams Agency, Sony Music throughout high school and college introduced me to individuals who became lifelong mentors and friends and the family I choose – my tribe.  There were moments that shaped my possibilities as a young woman – concerts, movie premieres, parties, after-parties, conferences, executives and celebrities.  These moments provided access to worlds I wasn’t always familiar with, but that made me keenly aware that Black folk are indeed magic.  Now admittedly, some things I retain, other memories have fallen to the recesses of my mind.  But some have begun to resurface.

Bearing witness to Black history in the making at the magnitude of the highest office of the land is a phenomenally, emotional thing.  As a Black woman I’ve always felt an enormous sense of pride at our collective achievement.    I’ve been sitting in a space where celebrating the current big wins is juxtaposed to honoring the loss of legends and the memories that were instilled in me.

Witnessing the swearing-in of Madame Vice-President Kamala Harris by Associate Justice of the Supreme Court Sonia Sotomayor was a crowning moment on Wednesday, January 20, 2021.  As I was able to find one hour to block my calendar free from meetings, I could feel the emotion of seeing these women of firsts owning their place in our checkered American history.  All juxtaposed to the new American history being created on that day by poet laureate Amanda Gorman becoming the youngest person to deliver a poem at a U.S. presidential inauguration.  The 22-year-old recited her poem “The Hill We Climb” after Joe Biden and Kamala Harris were sworn in as president and vice president, and my pride beamed for myself and my legacy #CMK.  It was a day of renewal, and one where she spoke of her truth, and the possibilities that reminded me of my youth.  It was powerful witnessing Black history in the making.

And yes we are far from polished
far from pristine
but that doesn’t mean we are
striving to form a union that is perfect
We are striving to forge a union with purpose
To compose a country committed to all cultures, colors, characters and
conditions of man
And so we lift our gazes not to what stands between us
but what stands before us
We close the divide because we know, to put our future first,
we must first put our differences aside
We lay down our arms
so we can reach out our arms
to one another”

Concurrently, hearing about the passing of Ms. Cicely Tyson just a few days later, whose career spanned more than seven decades, conflated the forward momentum, with the disappointment of loss.  Ms. Tyson was known for her portrayal of strong black women.   I came to know her as an actress via the television film The Autobiography of Miss Jane Pittman,chronicling slavery to the Civil Rights movement, through the lens of one woman.  Cicely Tyson was a legend on screen and stage.  She breathed life into her characters that provided us history, awareness, self-esteem and grace.  I saw her in all mediums – TV, film and the stage.  At the age of 88 she became the oldest recipient of the Best Actress Tony Award for The Trip To the Bountiful, which was amazing to experience first-hand.  She was a warrior on the stage and screen, and a regular New Yorker when off.  I’ll never forget seeing her sans glam waling down 72nd Street on Broadway with her shopping cart, seemingly running errands on her own.  She too was history in the making.

In looking forward to moving through 2021, I’ve been reminded of my own Black historical experiences and of those around me that we were making in our own world.  Those Facebook memories are amazing for reminding me to sit still and smile about the journey, because it has been quite amazing, and full of flows and ebbs.  From having an opportunity to interview Oprah Winfrey, to witnessing my mentor purchase a legendary advertising agency.   It’s supporting one of my oldest friends through her breast cancer journey and witness her become a warrior and survivor, to helping another navigate a tumultuous divorce and come out stronger and more confident in herself.

From finding community in my faith through my church Christian Cultural Center with my Pastor AR Bernard at a critical juncture in my young-adulthood, to deepening my relationship with God and navigating with a sisterhood of believers, where we still pray for each other to this day.  Black History in the making was meeting my biological sister after our father passed away and navigating our relationship coming from two different life experiences and worlds. It has been finding love, navigating marriage, having a son and building a life with a family – and being able to maintain through a global pandemic and racial reckoning in 2020 – Black history in the making.

It took me a minute to realize I’ve been experiencing and/or creating Black history in the making all my life.  Life is a montage of memories.  And those memories big and small are all a part of the fabric of my colorful tapestry.  I have to constantly remind myself of that.  I also have to remind myself to get more comfortable to share these stories. Share how I am processing these experiences. Most of the time, I consider my moments not to be of great interest to anyone but myself.  As I am growing as a person and leader, vulnerability is an area where I am stretching myself more than ever.  I suppose it is the reason I decided to join Our Daily Feels when the opportunity was presented to me by Cherry Maggiore.  It was a moment that I wanted to challenge myself to further explore my own narratives and the world around me.  My intention is pure – see me, honor my history and create my future.  Ironically, it’s a mindset I want #CMK to embrace as he grows in his confidence and ability, now and moving forward, knowing he is and I am, Black history in the making. 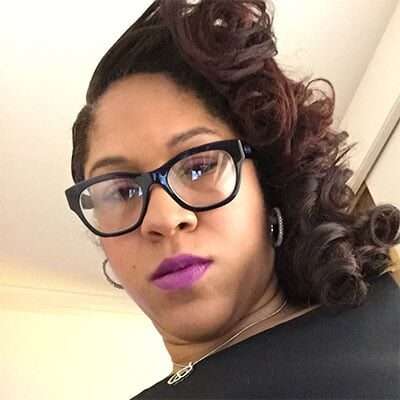