He’s not heavy, he’s my brother. No really, he’s in great shape.

So, the events of the last almost two years have caused me to do alot of thinking, mostly about my family. When I was contemplating the topic of my blog this month,  the subject  became clear  to me.

For those of you who know me, or my girls, have read my book, or follow my blog, you know how important a role my brother plays in our family.  Uncle Frankie has been a constant in our lives, and particularly after my girls got diagnosed, shortly after their second birthday.  He was always there to help.  Transporting the girls to and from school, therapy, evaluations and doctor appointments was definitely a two man job, and he was the second man.  He was always at my side, and early on, he was often assumed to be my boyfriend, instead of my brother, you know, the whole Uncle thing.  When someone would say “he’s your brother, I thought he was your boyfriend”, we would respond in unison “he’s/she’s not my type”.  Gross.

But really, Frank has been the cornerstone of our family for as many years as I can remember. Now, I am not known as the most sentimental person, noone in our family is.  It is for this very reason that I struggle to explain what a wonderful person Frank is.  He was always there, when things went wrong, to bail us out,  and occasionally to remind me that he told me so. When things were great, which admittedly was not as often an occurrence, he was there  to join in and celebrate. After my father’s death he stepped up.  When my mother began her decline from Alzheimer’s disease, he took on the role of caretaker, housekeeper, and basically overall cheerleader for mom.  His ability to fill a void, without being asked, to take on the role of Uncle Extraordinaire for my girls, still leaves me completely indebted to him.

He is quite simply a champion of a man, taking on responsibilities that were not his to bear.  Every little girl should be lucky enough to have an Uncle Frankie in their life.  So, I will applaud Frank in the only way I can…With A Good Old Fashioned Roast. So Let’s begin.

This photo of my brother and I had a permanent place on my mother’s dresser.  Cute, right?  But, those angelic faces were somewhat deceptive.  So let me set the stage, in the last 60’s it was not uncommon to only have one television in your home.  I remember a black and white console in our living room.  Now, the seven-year age difference was clear with regard to the TV programs we watched.  I was quite interested in Mr. Rogers Neighborhood,  Frank, on the other hand, preferred  Star Trek, and as kids sometimes do, we argued over tv time.  I do not recall the particulars here, but I can only assume that Frank felt that he could bully me into a Star trek marathon.  I still can vividly remember running into the kitchen, opening the white metal cabinet that the tools were in, and taking out a hammer.  What happened next, which has been lovingly referred to as the “hammer job” involved a very cute, Mr. Rogers obsessed little girl, whacking her brother on the back of the head with a hammer.  Yeah…let’s just say TV priveliges were closely monitored after that. One can only imagine what Mr. Rogers would have thought.   To this day, any memory lapses Frank experiences are automatically attributed to that fateful event. He’s also very good at balancing books on his head.

This photo was taken in 1978, when my brother….and his hair….graduated from college.  Now, he has assured me that he was very cool…..and I have no reason to doubt that, I mean Honest Abe Lincoln had nothing on Frank in the integrity department.  I mean look at that shiny shirt.   He could have easily been an extra in my favorite movie Saturday Night Fever.   Probobly a seated extra…. not the most rythmic mover…. if you know what I mean.   And that hair, I have been trying for the last 40 years to have curls like that….good hair is definitely wasted on men.

Now, despite his very cool persona in college, Frank has become a rather conservative guy.  He is a former banker, Wall Street Journal reading, Bloomberg watching conservative.  He’s not just square….he’s square squared (patent pending).  I tell you this because Frank engages in a perplexing behavior that is very much out of character.  So, some people fix their hair, or apply lipstick in preparation of a photo being taken….Frank opens his shirt, or in some cases, removes it completely.   Just look at this photo from my college graduation almost 40 years ago.

Now compare that photo to the one below, of Uncle Frankie with my girls.

Almost 25 years later, Uncle Frankie has maintained his slender physique.  I hate him for that.  Ok….maybe hate is a strong word, but I truly resent his ability to keep his youthful and fit appearance.  Maybe he’s a closet vampire.  Anyone that knows me is well acquainted with my struggles with my weight.  So when Uncle Frankie proclaims that his thirty four inch slacks are tight  on him, I want to slap him. .. there I said it.  He is also quite energy efficient… cool in the summer, warm in the winter, never hungry, never thirsty.  If he was an air conditioner, he would have 5 stars on his ass.

Frank’s relationship with the girls has been very interwoven into their therapy sessions. If  you ask him, he will tell you that he was integral in Gianna’s development of language.  From a very young age, Gianna would request that Uncle Frankie draw for her, she would tell him what she wanted and he would draw it. The picture below is his latest creation .  Fortunately, Gianna asked that he write “APE” on that masterpiece.  To me it looks like a very cold koala….that has to pee, but what do I know.  At least she’s happy.

No wonder my kid’s confused.

Oh, one last thing, If you ask Uncle Frankie how old he is, he’ll tell you he is 29.

This man, this picture drawing, headphone fixing, device recharging Autism Whisperer,  has changed our lives in ways that cannot be quantified.

So I hope this roast has given you some insight into Uncle Frankie. He is truly the greatest man you will ever know.  We are lucky to have him.

Don’t tell him I said so.

“Johanna Cascione is a mom of adult twin daughters with severe autism, and a first time author of an autobiography – “Worn Like A Badge, Published under the moniker J. L. Verita.

After a career in the financial services industry, and a 10-year journey to have children, Johanna received the news that her twin daughters had severe autism. She experienced profound depression and anxiety. The diagnosis of her girls, especially in light of her struggle to have them, was almost too much for her to bear.

Her decision to replace the fear with hope, weakness with strength and the anger with kindness, was not an easy one, but she found it to be her only option. Her resolve to focus on hope, kindness and humor, especially when they were in short supply, served her well.

Today Johanna continues to advocate for her girls, as well as provide support for other families of individuals with autism. She has many stories to tell, from a life that was not at all what she expected. She is finding that her voice is one of honesty, hope, and yes…humor. Laughter heals the soul, and don’t we all need some of that. 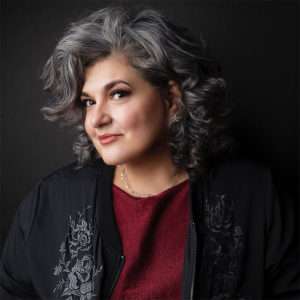